Coming from Austria I also share a big fondness for the former emperor's favourite dessert, Viennese apple strudel. In Austria we have it on it's own but here in England it is served with custard, which is a heavenly combination. So I came up with a vegan apple strudel version and a delicious and easy home-made vegan custard. From preparations to finish this dessert can be made within 30 minutes! What are you waiting for?

After having lived in London for 11 years I still often miss Austrian cuisine. And, in culinary terms, nothing says Austria more than Viennese apple strudel. It reminds me of Sundays spending time with family and having apple strudel and coffee after lunch. Or lazy days in traditional Viennese cafés chatting the day away with friends and enjoying a Melange (the Austrian version of cappuccino) and a Mehlspeise (Austrian German for desserts made with flour). So of course apple strudel had to be veganised, which was actually quite easy. And I've always been a big custard fan (as a kid I would often have it on its own), so I veganised it as well. I had no idea how easy it would be: 4 ingredients only and it tasted heavenly!

And now that autumn is here and apples are in season what better excuse is there to have this amazing and super easy dessert. 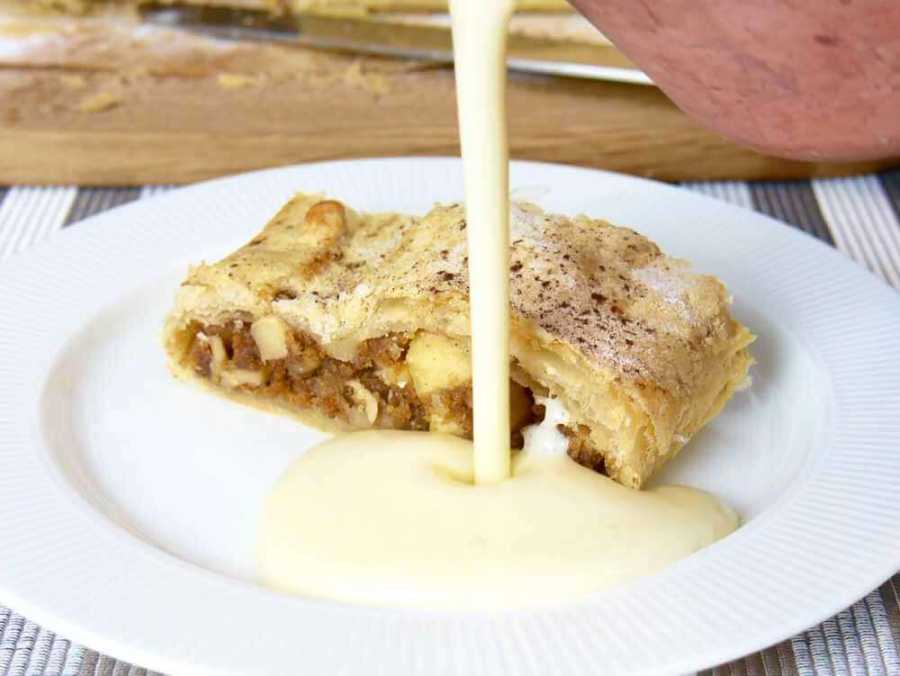 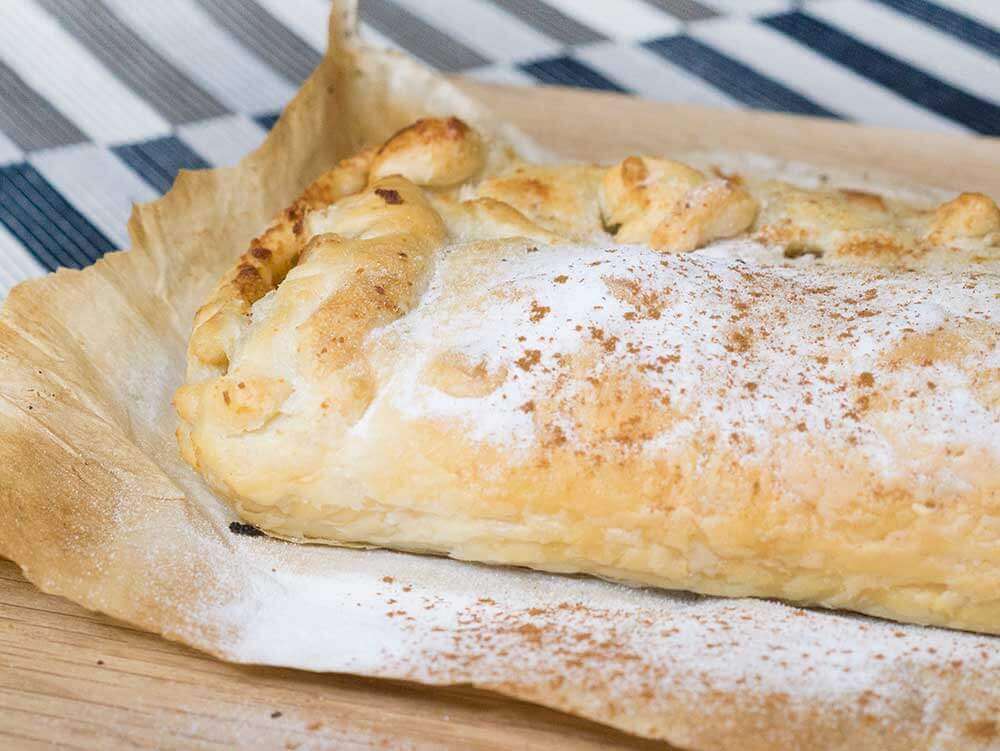 After about 20 minutes in the oven the vegan apple strudel was golden brown and the fragrant scent of apples was amazing. I let it cool down for a bit and then sprinkled icing sugar and cinnamon on top. 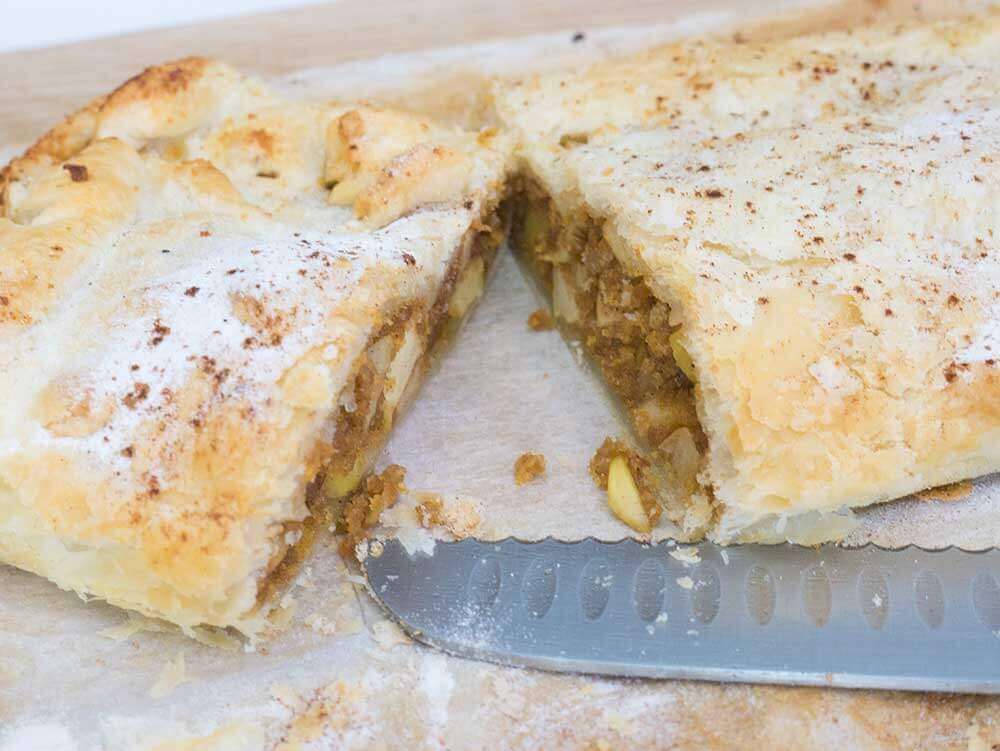 The more traditional way would be to make your own strudel dough but I wanted to keep it easy and just used puff pastry which is always a winner. 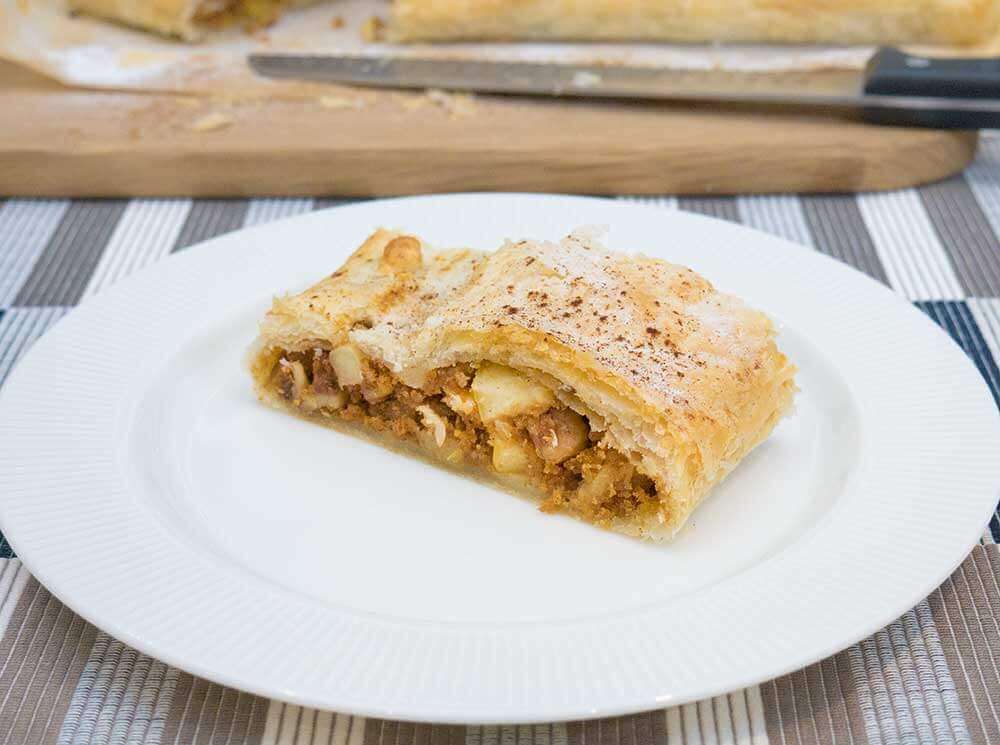 Vienna on a plant - Viennese apple strudel the way we would have it in Austria, on it's own with coffee. In some recipes people also add sultanas to it, but I prefer it without. If you do, add roughly 40g of sultanas to the mix. 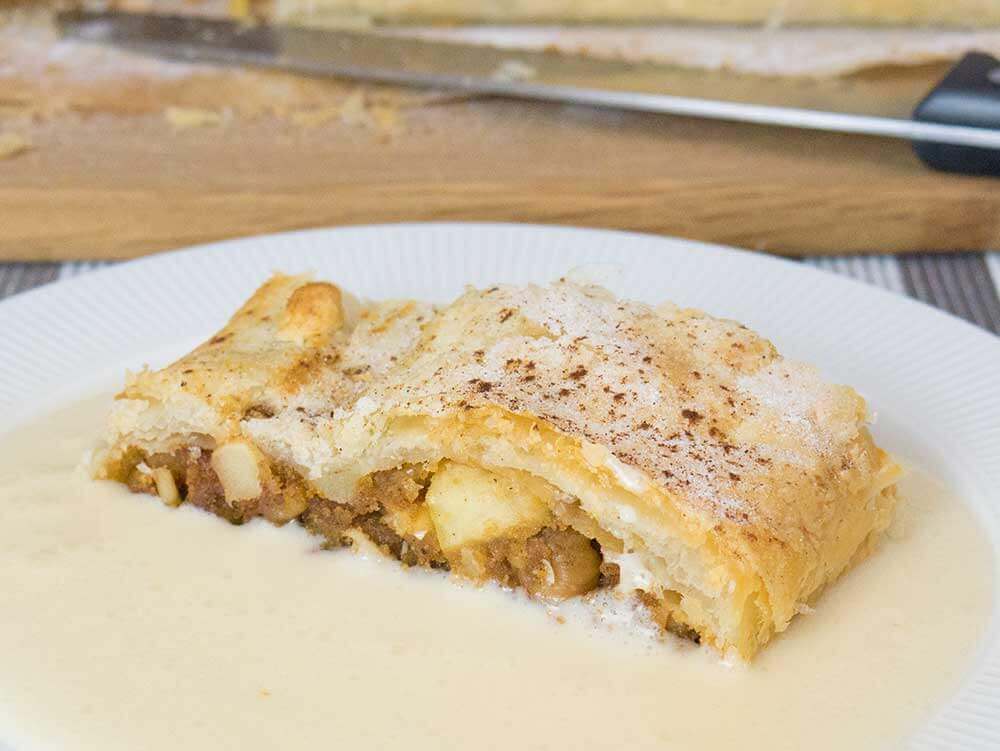 In my excitement I created a sea of vegan custard. Although I wouldn't have wanted any less. 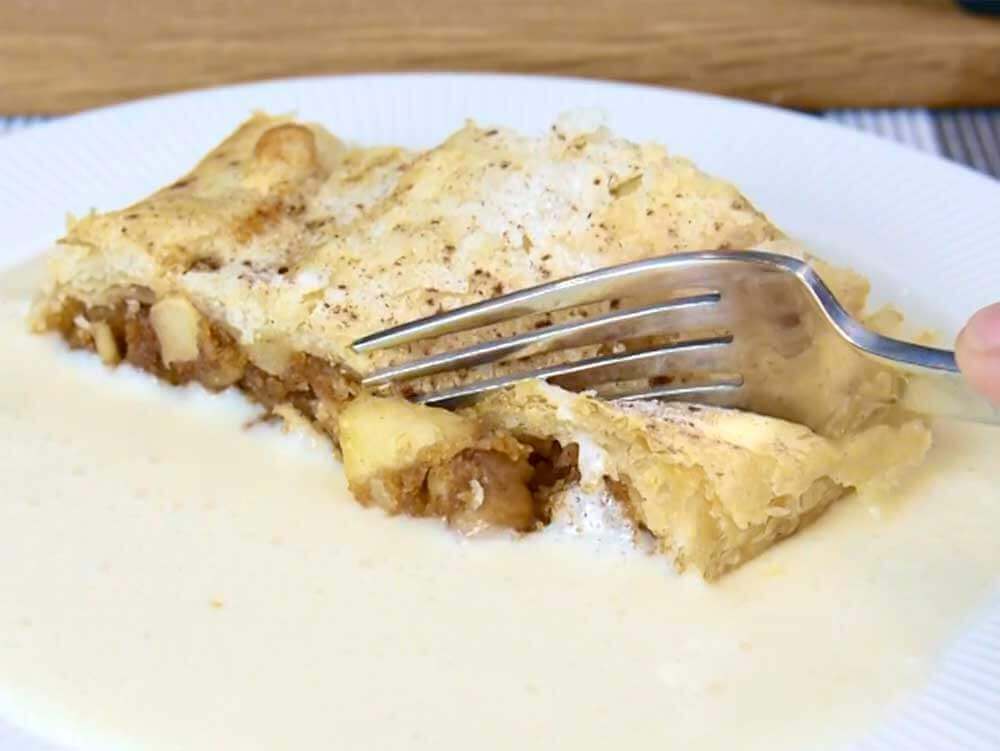 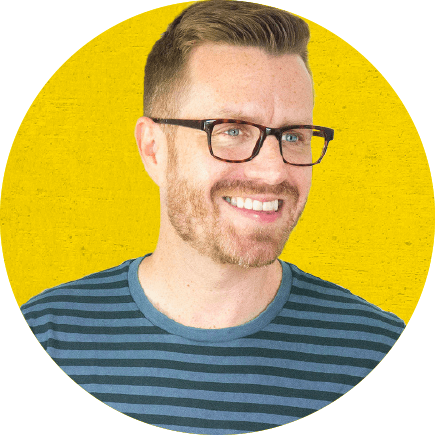 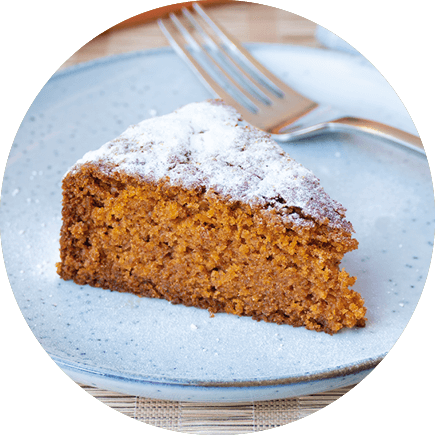 Melt 40g of margarine in a pan. Add 60g of breadcrumbs and toast slightly. If you want to avoid margarine you can also toast them in a bit of sunflower or coconut oil.

Mix together with your hands.

Roll out a puff pastry sheet (most puff pastry sheets are vegan but check before you buy). Transfer mix to the sheet and evenly spread out in the middle (basically the same way you would make a wrap). Then fold the bottom part of the sheet over the mixture, take off paper and then fold the top part over. Take off the baking paper and slightly press it down so it doesn't open up when it's baking. Then fold in both ends.

Bake in the preheated oven for 20 min or until it has a nice golden brown colour.

To a cold pan add 2 cups of plant-based milk (soy, almond or rice milk, doesn't matter), 2 tsp vanilla extract/essence, 50g icing sugar and 2 tbsp of corn starch. Whisk well (or blend) so that there are no lumps. Heat it up and cook on medium heat for 5-10 minutes. Stir continuously as it can burn easily. After a while the custard will thicken up nicely.

Take the strudel out of the oven. If you are impatient you can eat it straight away but it's recommended to let it rest a bit. Then sprinkle icing sugar and some cinnamon on top. Cut off a slice and pour the vegan custard over it. Enjoy!

And if you like custard as much as I do check out my heavenly vegan mille feuille recipe here. 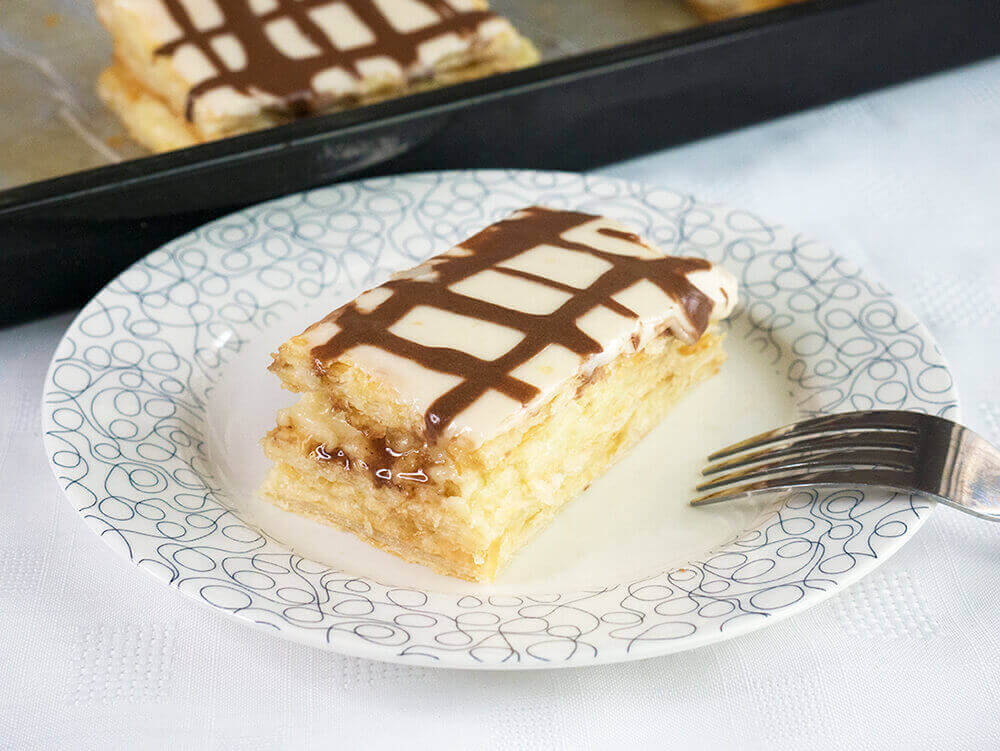